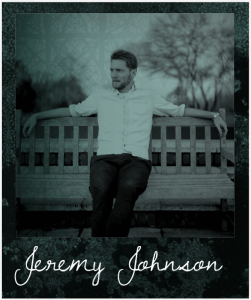 The seeds of his songwriting stretch back to his school years, but insecurity and the inexperience of youth stood in the way of a desire to share any narrative creation. For most of his 20s, Jeremy’s musical passion burned in the background of an international career as an Earth Scientist, a fascination with the natural world being an ever-present element of his life.

​Jeremy began performing and writing more seriously whilst living in Angola at 25. A gradual blossoming of creativity, hand-in-hand with a desire for the exploration of peoples, cultures and places. The following year saw him break the rhythm of a traditional career and ride a bicycle, solo and unsupported from the UK to India. A journey that would permanently alter his outlook and understanding of life. An accidental, underground gig in the Holy city of Mashhad in Iran, would prove to be a turning point in perspective for the young musician. 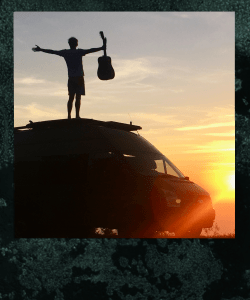 The seeds of a musical career sprouted not long after, whilst Jeremy was living in the Netherlands, playing acoustic sessions in the city of Groningen. 2016 would see Jeremy once again shun traditional employment, traveling to the southern hemisphere, with guitar and surfboard in hand to spend a year playing songs and surfing waves from far northern Indonesia to New Zealand’s wild volcanic coastline.

Returning to Europe in early 2018, Jeremy began to concentrate on music full-time, buying an empty glazers’s van and converting it into a mini house/tour bus before hitting the road for a four month tour busking and gigging along Europe’s western surf coast. Jeremy prides himself as an independent and self-managed music entrepreneur and musician, tackling all elements of a modern, remote music career. ‘Greenie’ the van and Jeremy continue to tour and adventure from the badlands of the UK music scene to the snow shrouded bars of the French Alps, whilst continuously writing, demoing and recording for new releases.

Jeremy’s continuing story into music is one of philosophy, reflection and adventure, themes that can be heard in the songs he writes and the shows he performs. Fascination for this incredible planet and this wonderful and challenging life lie at the heart of this perpetual nomad and his creativity.